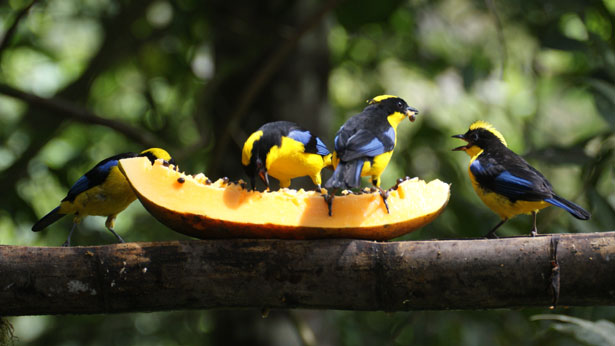 Why do some female birds also have showy plumage?

In some bird species, the male is more colourful than the female. This is explained by sexual selection: Males displaying more colourful plumage are able to attract more females, and so evolution favours them. And yet there is much that remains unexplained. Why do the females of so many other species also have brightly coloured plumage - or even look identical to the male?

To shed light on this question, an international team of scientists lead by Dr James Dale of Massey University, in Auckland, New Zealand, analysed the colouration of all 5,983 species of passerine bird.

(Passerine - or perching - birds make up more than half of all known bird species; they're notable for having feet with three toes pointing forward and one back - perfect for grasping or perching on branches.)

The team performed a spectral analysis of digitally scanned images of all passerine birds from the Handbook of the Birds of the World - a total of 11,966 plumage patterns. They were then able to plot the male and female of each species as a dot on a graph based on the amount of red, green and blue in its plumage. By counting the sexes of the nearest 120 dots, the researchers came up with a “maleness” score for each dot, irrespective of whether the bird was male or female.

They found that in polygynous bird species (where males are able mate with more than one female) the males tend to be more colourful than females. But in one of the more surprising conclusions in the study, Dr Dale argues that in such a species, there is also a pronounced reduction in female colouration: The pressures of sexual selection drive females to evolve duller plumage more than they drive males to evolve more colourful plumage. One possible reason for this is that in such a species, males may be less choosy about their mates and so female birds benefit less from displaying colourful plumage.

In a monogamous species, where there is more competition between females for mates, the females are more likely to also be brightly coloured.

A species' size and breeding location also has a strong influence on its plumage.

Dr Dale and his colleagues found that larger species are more colourful than smaller ones. This supports the idea that larger birds can be more colourful because they are less likely to be attacked by predators and so their ability to blend in and avoid detection is less important to their survival.

The study also confirmed the long held belief (it was observed by Charles Darwin) that species from the tropics have more colourful plumage than temperate species.

Classical sexual selection theory has up until now been focused on explaining colourful male plumage. “Our research demonstrates that bright female plumage is also functional and very important,” Dr Dale said in a Massey University news release. “This is also the first study to clearly show that tropical species are more colourful than birds from other regions on earth. This does beg the question about what exactly it is about the tropics that favours more colourful plumage. We suspect that competition is fiercer in tropical environments, but more research is needed.”