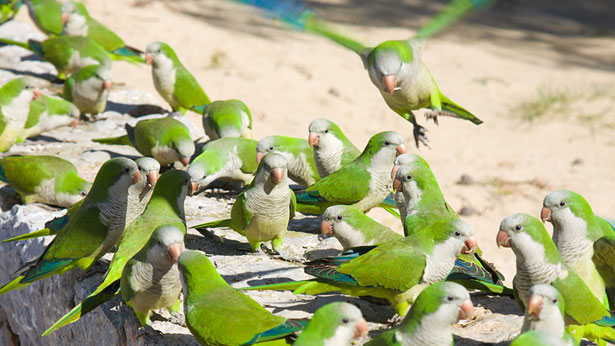 How quakers find their place in the pecking order

Quaker parrots – also known as monk parakeets - are unique amongst parrot species: Instead of nesting in holes like other parrots, they build large communal stick nests – fully-enclosed, multi-chambered, domed structures that can house a number of breeding pairs. A quaker colony can consist of several of these domed nests, which are the centre of much of their daily activity.

Elizabeth Hobson, a behavioural ecologist with the National Institute for Mathematical and Biological Synthesis in the U.S., has been studying quaker parrots both in the wild and in captivity for years. She believes the social lives of quaker parrots can teach us a lot about how complex societies – including those of primates – are formed in nature.

Hobson is the lead author of a study published last week in the journal PLOS Computational Biology which shows how quaker parrots find their place in the pecking order of quaker society.

As Hobson explained in an interview, there's only so much you can learn about a group of parrots by simply watching them interact. To spot really subtle patterns in their behaviour, you need to crunch data.

To gather that data, the researchers released two successive groups of around 20 captive quakers into an outdoor flight pen, and observed their interactions over 24 days. They watched for aggressive behaviour. Each time one quaker approached another aggressively and displaced him – knocking him off his perch – the victory was recorded.

Hobson then fed the resulting numbers into complex mathematical models and analysed them.

She found that after one week, a newly formed quaker group had ordered itself into a dominance hierarchy – a kind of feathered league ladder in which each bird tended to challenge only birds nearest to it in rank. It wouldn't bother, for example, intimidating the lowest-ranked bird, nor would it dare challenge the bird at the top.

The study found that a bird's rank was not associated with its size or physical location within the group. Instead, the birds appeared to observe the conflicts of other individuals. Whenever a tussle occurred, the rest of the group would be watching and the victor would move up a rung on the ladder.

"Parakeets appear to be able to connect the dots in their groups, remembering chains of aggression, so if A fights B, then watches how B fights C and how C fights D and how D fights E, then A will use this knowledge to adjust how it interacts with E based on all of the fights in between," said Hobson.