This tiny creature has to grow up fast. When it is 30 days old, it will make an 8,000 km migration from far north Russia to its wintering grounds in South-East Asia, braving starvation, exhaustion and hunters along the way. 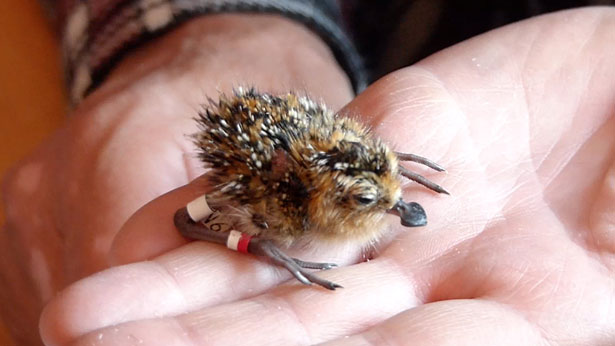 Five years ago, everyone thought it was a lost cause. The worldwide breeding population of spoon-billed sandpipers was estimated to be fewer than 100 pairs, and it was declining at a rate of 25% a year.

Climate change had taken its toll, big development projects were destroying their winter mudflat habitats in South-East Asia, and they were being killed by trappers in Myanmar and Bangladesh.

The spoon-billed sandpiper was set to become the Dodo of our age.

In the very nick of time, a multi-national partnership of conservation organisations decided that something had to be done.

Conservationists from the UK-based Wildfowl & Wetlands Trust and members of partner-organisations set out for the wild north-east Russian tundra. They braved harsh weather - and bears! - to scour the hills and marshland for nests, and brought back chicks and eggs to Slimbridge in Gloucestershire for hand-raising.

Inside protected biosecure enclosures at Slimbridge, WWT aviculturists recreated both the winter and summer habitats of the birds, as well as simulating, as best they could, their social environment. The result is a protected 'ark population' of 24 spoon-billed sandpipers in the UK. The WWT has yet to successfully breed the birds in captivity, but if they do (they remain optimistic that they will), this population will be crucial should the unthinkable happen and the species become extinct in the wild.

Since 2011, conservationists have been carrying out what they term “headstarting” on the breeding grounds of the Russian tundra: They collect a breeding pair’s first clutch of eggs as soon as it has been laid. The pair will then re-lay a second, replacement-clutch of eggs. Meanwhile, the aviculturists artificially incubate the ‘stolen’ eggs, hand-rear the chicks, and release them as a group (after flagging them) when they are 18 days old. At the age of 30 days, the young birds begin their 8,000 km journey to their wintering grounds in South-East Asia.

Spoon-billed sandpipers have breeding success rate of around 0.6 young fledged per nest. “Headstarting’, however, has proven remarkably successful, increasing that rate to an average of 3 per nest - six times the unassisted average.

The greatest test of the procedure was whether or not the fostered birds would complete their long migration and return two years later to their Siberian nesting grounds to produce eggs. In the past, the proportion of fledged birds returning to breed has been depressingly low; many young birds die along the way. But the conservationists were not disappointed: They report that 3 out of every 5 fostered birds have been returning to Arctic Russia to breed. It seems the population decline has been arrested, at least for now.

For the latest news on the WWT project and behind-the-scenes interviews with conservationists working to save the spoon-billed sandpiper, watch this live broadcast from 20 August 2015: