Why do tropical songbirds lay smaller clutches of eggs than temperate species?

A researcher believes he has the answer to a long-running ornithological mystery. 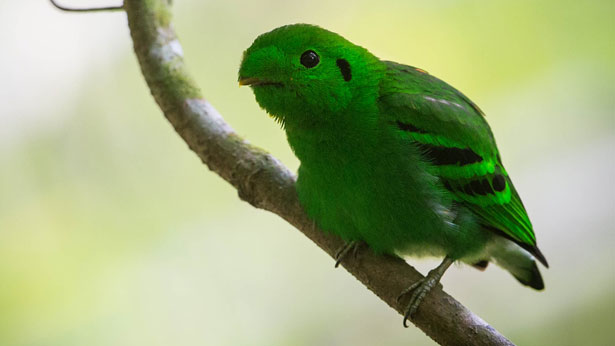 The Asian Green Broadbill is found in Borneo and Malaysia. The female typically lays two or three eggs.
Photo: "green broadbill" by Jason Thompson
CC BY 2.0

Why do tropical songbirds lay smaller clutches of eggs than temperate species?

Science has wrestled with this question since the British ornithologist Reginald Moreau called attention to it in 1944.

To find an answer, University of Montana researcher Thomas Martin has spent many years studying bird species in locations all over the world, including Venezuela, Malaysia and Arizona. He published his findings earlier this month in the journal Science.

Martin found that the young of tropical songbirds grow longer wings, and grow them faster, than nestlings of temperate songbirds. This gives their young an advantage in evading predators. To accomplish this rapid wing growth, the tropical songbird parents lay smaller clutches, allowing them to concentrate their available food in fewer (usually 2) nestlings. Temperate songbirds, on the other hand, lay larger clutches of eggs – generally 4 to 6, but as many as 10 with some species – and are consequently able to feed them less. The result is that temperate songbirds have “lower quality” offspring, which may therefore be less likely to survive. 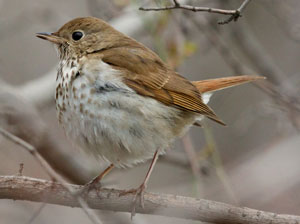 The Hermit Thrush, like other temperate songbird species, commonly raises four or more young
Photo: "hermit in the park" by Matt MacGillivray
CC BY 2.0

Why do tropical songbirds adopt the “fewer offspring” strategy, while their northern cousins are laying as large a clutch of eggs as they can? Martin believes the reason for this is that tropical songbirds live longer. Songbirds in temperate zones have to either survive winter or migrate; either option means they often only live for a few years. They simply don't have the luxury of lavishing their attention on fewer young each breeding season. The seasons being less of a factor in tropical climates, tropical songbirds live much slower, more relaxed and longer lives, so they able invest their resources in fewer young.

“Provisioning, parental investment and mortality are all related,” Martin said in a statement. “A later, faster growth spurt of tropical songbirds, together with higher parental effort invested per offspring, aids wing growth and flight capabilities after the young birds leave the nest.”

If you'd like to read more about Thomas Martin's research, there's a great in-depth article on The Guardian website: Life history trade-offs: why tropical songbirds have fewer chicks.

Video
The Whitehead's Broadbill is endemic to Borneo. As a tropical songbird species, it usually raises just two young - unlike temperate songbirds, which typically raise many more. The video below was part of the footage collected by Thomas Martin's research group.